One of Market Gardens vital objectives were the bridges at Nijmegen. These bridges were markers on Hells Highway. The traffic-bridge and the railroad-bridge were both in need to ensure that the ‘road’ to Arnhem was open for business. 504th PIR, 82nd A/B crossed the river in small boats and landed on the stroke of riverbank that became ‘Little Omaha’. But what happened with the traffic-bridge and the railway-bridge at Nijmegen after the initial fase of Market Garden ? 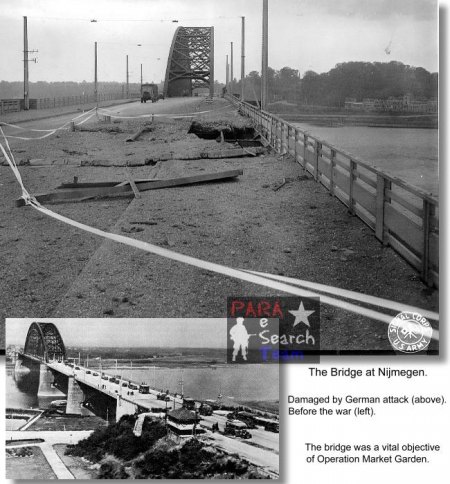 During the period after the capture of the Nijmegen traffic-bridge, this bridge over the Waal-River was subjected to German fire on a daily basis. The damage to the bridge wasn’t all that serious, but the German artillery made sure that crossing the bridge wasn’t ordinairy business. As Earl McClung , E-Co 506th PIR 101st A/B told us in 2003: ‘I was wounded but couldn’t be evacuated because of the bridge at Nijmegen being under fire all the time…’. Eventually McClung’s wound healed ‘on the line’. But soon new weapons became a serious threath to the bridges ! 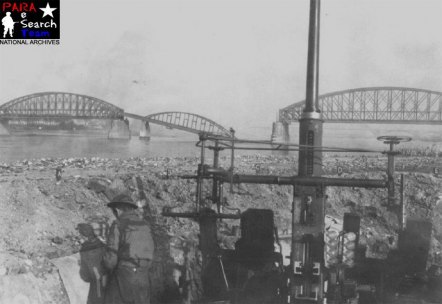 Damage to the traffic-bridge above, caused either by German arial bombardment (28th) or mine-attack (29th)…

After the heroic battle for the bridges the Germans attempted to destroy the bridges on several occasions. They tried by land (fierce counter attacks), by air (bombing and shell-barrages) and even by water…… 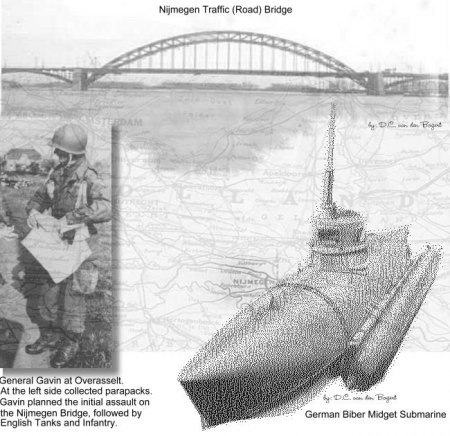 The railway-bridge was destroyed by a German airraid (picture above). At least 200 Luftwaffe planes surprised the British AAA near the Bridge during the 4 o’clock ‘Tea-Break’ September 28th. Both bridges were bombed, conventional and by small unmanned drones filled with explosives. The Nijmegen traffic-bridge was hit, but still usable, the railway-bridge was more seriously damaged. In the aftermath the Allied Command made sure that the protection of the bridge was intensified.

In the early morning of the 29th of September 1944 an attempt was made by German ‘frogmen’ to destroy the bridge.Eight frogmen, carrying two mines, tried to reach the traffic-bridge, but the mere current of the river proved to strong.  The mines were set on the riverbed under the bridge, not attached to the bridge as planned. The explosion damaged the bridges walkway, but this was minor damage. A second team of 4 frogmen managed to ‘hit’ the railway bridge again.

Out of the 12 frogmen in total, only two made it back to the German lines; Heinz Brettschneider and his teammate Jäger received the Golden German Service Cross for their actions. The other 10 frogmen became POW’s. With the railway now definitly knocked out (the middle ‘bow’ had collapsed), Allied Engineers constructed a boat-bridge over the river.

In early 1945 the Germans tried to destroy the bridge again. This time they used small submarines called ‘Bibers’. Biber-teams of the German Kriegsmarine (Kleinkampf Verband), were stationed 30 kilometer upstream at Emmerich. There are various official German, English and Dutch witness-reports… but most likely on the &lt;1&gt;14th of January a first attack was carried out by at least four (German version: 17) (English version: 24) of these submarines. 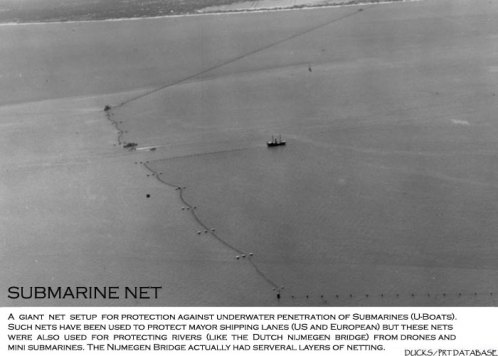 Eight torpedo’s hit the anti-torpedo screen, set up to protect the bridge. The next day a second attempt stranded with the four ‘midget’ submarines entangled in the remains of the first anti-submarine net . Although their torpedo’s were launched they only hit a second protective net-setup, which was setup close to the Nijmegen traffic-bridge. German reports noted 7 Germans KIA.

There are also reports, stories and clippings about German floating mines, mined boats, and even Germans dressed as English medics, carrying a brancard full of explosives to destroy the bridge. One thing is sure; the bridge still stands !

Special Thanks to: Cees Jansen